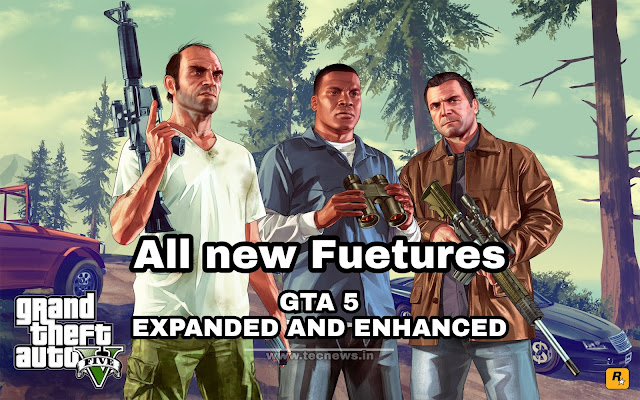 GTA online has many types of races, and all players are enjoying the game, So some leaks say the GTA 5 Expanded and Enhanced Edition come with more races, so players are not bored. And all players give more time to play the game.
Also, you can read GTA 6 leaks on release date, location, and more by Tom Henderson click here

All players are bored to drive old vehicles, so Rockstar includes new vehicles in-game. The game has many types of vehicles, but this all vehicles are old, because of the game launch in 2013. So the new GTA 5 comes with brand new vehicles, like Tesla. Also, the game includes new items like new weapons, new cars, new buildings, and more. What’s vehicle come in new GTA 5, tell me in a comment.

2) Some rewards in GTA Online

All players buy the game and complete the story, so Rockstar gives them some reward in GTA Online. Every player buys the game, this is maybe the first priority, so we see some special reward in GTA Online to buy the GTA 5 Expanded and Enhanced Edition.

The GTA 5 Expanded and Enhanced Edition launch in PS5 and Xbox Series X and S. So maybe the game supports the VR, and all players are getting the new exiprance. The game is made for next-gen consoles, so fans are very excited to play the GTA 5 Expanded and Enhanced Edition in VR headset.
These all features may have come in the game, this is not true, because of this all are the leakes. What you think guys please tell me in the comment section.
Also, you can read more GTA Articles. and GTA Trilogy Remastered Release Date, Price, all details.