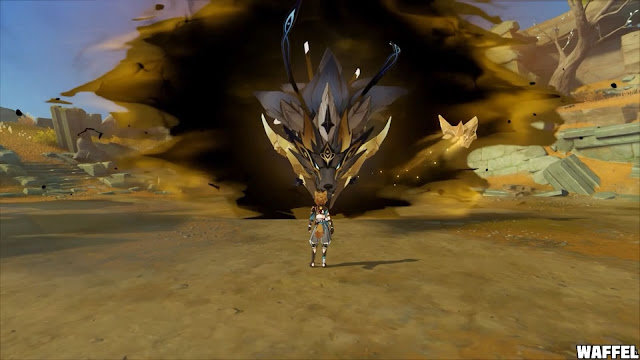 We can see in this video, Players approach the boss’ territory to challenge it, this animation should play and the boss comes, and we see the Arataki Itto takes much time to defeat the Wolflord boss. So the boss is hard to as compare other boss’s.
The Golden Wolflord boss should appear on Tsurumi Island in Genshin Impact 2.3. There’s a circular, open area on the south side of the island that the boss will appear. The Bosses attack him when players come their the area.

Beginning in version 2.3, the Golden Wolflord should provide unique challenges to players. The Golden Wolflord boss will apply corrosion on the hit, This hit deals damage over time, the shields are useless against it. Consequently, a healer like Kokomi or Jean should make this boss much more tolerable.
Given the design of the Golden Wolflord, it’s no surprise that this boss will have a variety of clawing and biting attacks. It may also call on the aid of some helpers, called Rifthound Alphas, to provide shields. Geo damage should prove helpful in defeating the Rifthound Alphas and destroying the shields.
Also, you can read the Genshin Impact 2.4 leaks: Yunjin and Chasm region expected release