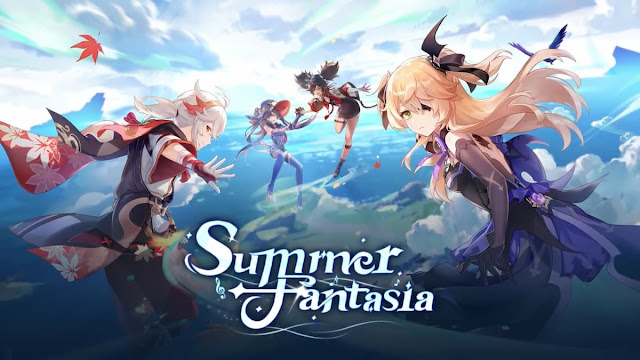 Genshin Impact 2.8 will come with new content, features, world quests, and many changes, also there is a new area to explore. Genshin Impact 2.8 update came on July 13, 2022. Players will be able to participate in the grand return to the Golden Apple Archipelago with fan-favorite characters Kadehara Kazuha and Mona, with Fischel playing a significant role in the story of the new update. This article will find all the new features and changes that come with GenshinImpact 2.8.

This tweet covered all features that come on Genshin Impact 2.8. Players waiting for a second chance to explore the Golden Apple Archipelago will finally have the opportunity to return to these vast islands and collect lots of treasure.
The Golden Apple Archipelago area again comes in time-limited. To unlock the area, a player first completes the Archon Quest for Kaedehara Kazuha and Mona’s Story Quest.
Shikanoin Heizou will also be added during this update, which will bring a new 4-star Anemo Catalyst user into the game. Heizou plays unlike any of the previous catalyst Wilders in the game, as he uses his catalyst to extend his close-quarter attacks, releasing powerful gusts of wind from his punches and kicks. Heizou Gansin Impact 2.8 will be available after the release of the update, so fans won’t have to wait to call it quits.
Genshin Impact 2.8 include a Fischl and Diluc new outfit. Players can read the full article (click here).

Travelers who reach the required Adventure Rank and complete the prerequisite quests will be able to use Story Keys to unlock the Hangout Event for Shikanoin Heizou.

New world quests and story will be added in Genshin Impact 2.8 update, there are three quests coming in the 2.8 update, here is the list:-

Hello Travelers!
Paimon wants to introduce you to the brand-new weapon that will be appearing in V2.8! Take part in the V2.8 quest storyline to learn more about this weapon~

(Examples based on Level 90 and Refinement Rank 1)#GenshinImpact pic.twitter.com/7FzoFVtlfI

Genshin Impact 2.8 update include a new weapon, that seems to play Kaedehara Kazuha’s story.  The damage to the Specters and all the Samurai attacks will be minimized, as well as the riff hounds and the Specters will adjust the distance they fly after being hit. The Specters will also have fewer tanks, making them easier to hit. There are a few new achievements include.
Genshin Impact 2.8 update maintenance begins scheduled on July 13 at 06:00 (UTC+8). And the maintenance takes almost 5 hours.

Dear Travelers,
This issue of Update Details will introduce the game content of Summer Fantasia V2.8.