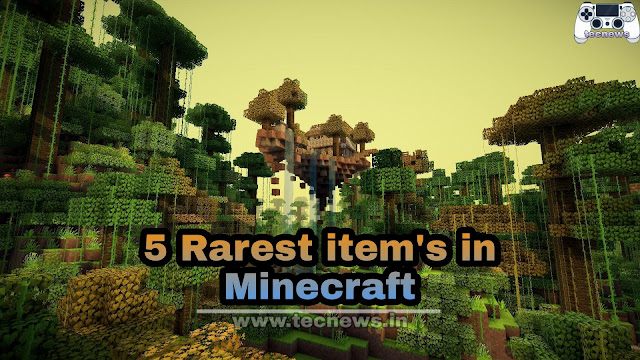 The  Minecraft players always need the rarest items, and they can show their friends, and also they are creating the YouTube video. But all players are don’t know what is rarest items in the Minecraft game. So we are seeing the all top 5 rarest items in Minecraft survival mode, this item easily you can get the creative mode.

Heart of the sea is the rarest item in Minecraft because they are found in some treasure chest. And all player knows to how hard to found the treasure chest. Also, the Heart Of The Sea use is players can breathe in the water, and this is the first use, also they can see all items in water.

Pig step is a music disc, and they can now be found easily, this is hard to found. The player can go the bastions, and they are chance to get the pig step is a 5.05%. The Pig step is not renewed items, So these are the rarest items in Minecraft, that’s why players are crazy to get the Pig step.

Conduit is the second last rarest item in Minecraft, so players can get the Conduit from the treasures, and this is the use of them to breath underwater, and also they are the damage the mobes. The player can craft conduits using the heart of the sea and eight nautilus shells.

The Dragon egg is the rarest item because the player can fight the Ender Dragon, and they are the win the fight, So the player gets the Dragon egg and Dragonhead. The Dragon is the most powerful Moster in the Minecraft game, so this is so hard to win. The first player goes to the End dimension, this is hard to found the End dimension, and the second is the win against the Dragon. If player are complete so they are winning the Dragon egg.
#Also, players can read the Best food farm in Minecraft, click hear.
Not this article is writer view, if there is change so please tell in the comment section.

Minecraft 1.18 pre-release 3 and 4 for Java Edition

Top 5 servers for Citybuild in Minecraft