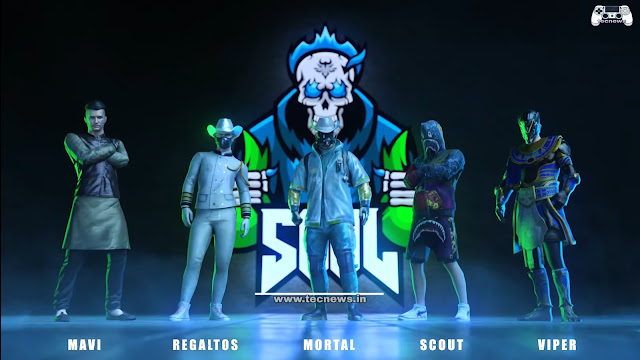 1. IGL/Support/Assaulter:- Mortal (Naman Mathur)
2. Assaulter:- Regaltos (Parv Singh)
3. Assaulter:- Scout(Tanmay Singh)
4. Support/Assaulter/IGL:-Mavi (Harmandeep Singh)
5. Support:- Viper (Yash Soni)
Team Soul includes two big players in the PUBG community the Scout and Mavi. These players are famous for their Assaulting and IGLing. The all players are the best players in Battleground Mobile India. Fans are don’t know about the Scout and Mavi joins the team Soul. This is a surprise to all players and fans about Soul’s new Lineup. I will give you full information about the team soul. Team Soul is the most loved team in India Esports. Team soul wins Multiple tournaments in 2019.

The Naman Mathur as we know as an in-game name Mortal. All players know this player. These players are the best IGL in the Gaming community. The  Mortal is a Soul team IGL, Assaulter, and supporter. Mortal is famous for his competitive clutes. The Mortal is also the best supporter and Assaulter. We see the many time the Mortal use Sniper in the tournament and they are changing the game.

All players know to Who is ScoutOP. The Tanmay Singh as we know as a Scout there is the Biggest player of the Gaming Community and they are famous for their m416 spare, also their gun power. The Scout is an Agrecive player and they are the best Assaulter in all tournaments. They are the Four finger players and many times save their team to create the best clues.

Regaltos have been part of Team SouL and they are playing BGMI Esports for over 2 years. So there is an experience of the Esports. Regaltos is the best assaulter in the country, they are famous for their m416+6x spare.

Viper (Yash Soni) has been part of Team SouL and they are also playing BGMI Esports for over 2 years. Viper is the oldest player of the team soul. They are the best Supporter in Battleground Mobile India. Viper is played the game using a thumb and they prove the power of thum.

Mavi (Harmandeep Singh) is famous for his IGL’ing skills and they are win numerous title wins including the ESL India Premiership and PMCO Spring 2020. The Mavi is a Support, Assaulter, and IGL. The Mavi get a second-place finish in the PUBG Mobile World League 2020.
Team soul gets more achievement in their future. What to think guys? Please comment below.