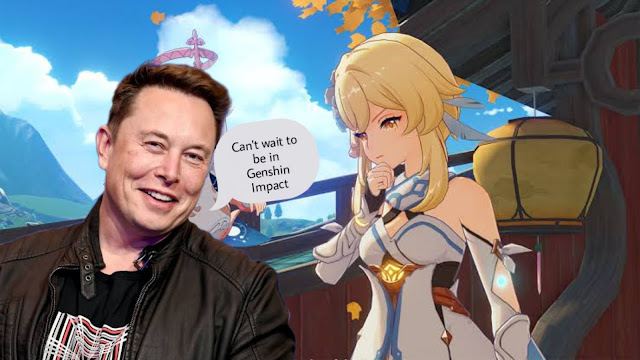 Recently new trend come in Genshin Impact, the trend involving Ella musk and Elon musk. Now, many people don’t know who is Ella musk? So, we see the full detail about the Elon musk and Genshin impact trend.
Ella Musk is NPC named in-game, there is nothing to do with Elon Musk. She studying the Hilichurlian Language, There name Ella Musk similar to Elon Musk and the trend was started. (We see full detail about the trend in this article)

This challenge has been deleted by the original community, It’s included another Twitter account, Ella Musk (@Paimon2theMoon). The account is based on some challenges, and the number of fans follows it. The Ella Musk Twitter account is 71.4k followers and the original community (Genshin Impact) has 2.4M followers. And it was a meme challenge that didn’t take off in an intended way.
Different people react to this challenge differently. Some people take a lighthearted joke, while other people take it as wasting their time on trivial affairs. Some parts of the fanbase point out how miHoYo lost much goodwill after the disastrous handling of the Anniversary event. Hence, their trying to have fun with a divided community backfired.

Can’t wait to be in Genshin Impact 🤣

Elon musk replies to the bizarre challenge with a single sentence with a laughing emoji. also, Elon Musk replies to a few unrelated questions, such as animes to recommend to other people and a Starlink inquiry.
After this tweet, Ella Musk and few more people replying to Elon Musk’s Tweet. As the original community challenge, Ella Musk’s reply is no longer there, it is just one sentence.
The Ella account doesn’t more active on tweeter. Its first visible post was on September 7, 2021, and the last post is September 8, 2021.
Also, you can read Genshin Impact: Arataki Itto’s release date and name card

Who is Ella Musk?

The Ella musk is a member of the Musk family in Genshin impact. There is nothing related to Elon Musk. The Musk family studies Hilichurl linguistics in Genshin impact with two more members.
Ella Musk is the older sister of Dr. Edith (strangely, Ella uses a child model, and Dr. Edith uses an adult model). The Ella Musk Twitter account is official, there is not by fan mad account.

It would appear that both the Ella Musk and the Genshin Impact Twitter accounts have moved on from the initial community challenge. Only time will tell if they’ll choose to revisit the concept of an Elon Musk x Genshin Impact crossover.
For quick gaming, update follow on Instagram, click here