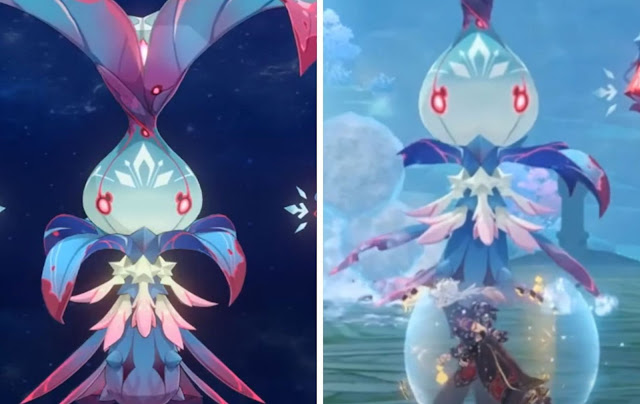 The Genshine Impact 2.3 leaks show a new boss, the Whopperflower boss known as a Fel Whopperflower.
The Whapperflower boss is larger than a normal Whapperflowers. It’s normal boss, they give normal damage using Cryo attacks. We see the boss fight in video leaks, this video is only one minute and 25 seconds long, so players should keep that in mind.

The first thing to note the Travelers, the location of the boss is not correct(according to video leaks). We see some attacks from the Whapperflower boss.
The video leaks start with throwing a giant snowball toward the players. Snowballs give normal damage, And another attack is to throw the snowballs in a vertical trajectory. We see the boss use more attacked in fights, but it is not classified yet.
(Also, you can read the Genshin Impact 2.4 leaks: Yunjin and Chasm region expected release)

Dust and Shadowed Snow: Events in Dragonspine including: